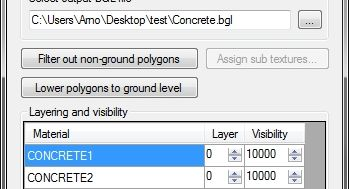 A user reported that the ground polygon wizard of ModelConverterX lost some of his polygons while converting them. When I was debugging this issue, I found out that this was because the polygons were not actually on the ground. They were a few centimeters above the ground. The code that makes sure the polygons are sliced correctly for FSX can’t handle such polygons correctly. That’s why some of them got lost.

So to fix such trouble I have made two small changes to the ground polygon wizard. The first is that you get a warning when your model contains such polygons. The second is that there is an additional button now, which when pressed will ensure that all ground polygons are lowered back to ground level.

Hopefully with these changes the ground polygon wizard works correctly in more cases. But let me know if you encounter more issues.