I have just released a new version of ModelConverterX. The big change in this new release is that the ground polygon wizard is now included. Before I will go into the details of how to use this wizard, let’s first take a look at the problems it is trying to solve.

The ground polygon wizard of ModelConverterX tries to help with these problems. I am not trying to say it is the magic solution that solves all your ground polygon problems, but hopefully it helps you.

Before using this functionality, make sure that you the path to SCASM specified in your options. The wizard is using SCASM to create the BGL file. Don’t worry if you think SCASM is old, the code generated for the BGL is the same as the FS2002 gamepack would. 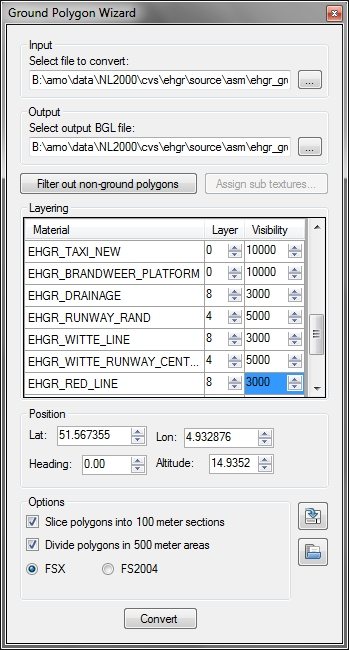 So now let me explain which options the wizard has and how to use it. At the top of ModelConverterX you see a button called wizards. Use this to open the ground polygon wizard, it will appear as a separate window. It looks like the one shown on the side here (but empty when first loaded). We’ll now walk through all the options.

Select file to convert: here you select the file that contains your ground polygons and that ModelConverterX should load. This can be any format supported by ModelConverterX. Once you have selected a file here it will be loaded in the background and once that is done the object is shown in the preview and the rest of the form is populated.

Select output BGL file: here you select where ModelConverterX should generate the new BGL file with your ground polygons.

Layering and visibility: the grid shown here shows all materials used in your object. You should be able to recognize the names of the textures you are using. For each texture you specify at which layer you want it to be and what the visibility of that layer is. The visibility is not specified per texture, but per layer. So if you change the visibility of one texture on a layer, all others on the same layer get the same visibility.

Slice polygons into 100 meter sections: this option slices big polygons into smaller section. This is required when you are exporting to FSX, else the ground polygons will not follow the curved earth correctly.

Divide polygons in 500 meter areas: this option divides the polygons into areas of 500 meter and exports them per area. When exporting from GMax all your ground polygons have the same reference point. This means they are all loaded at once and the scenery engine also has to evaluate all of them to see if they need to be drawn. What this option does is group them in areas of 500 x 500 meter. Each of these areas gets their own reference point. FS can not evaluate per area if it needs to be drawn or not. And the visibility is specified from the center of that area. In general this will give you a performance increase, especially when you only have part of the airport in view.

FSX or FS2004: select for which version you are exporting the BGL file. Due to the different earth model it is not possible to use the same BGL in both FSX and FS2004.

Now press the Convert button and wait until the wizard form closes. Your new BGL file should now be ready at the location you specified.

Besides the options you see two small buttons. These can be used to save and load the ground polygons wizard settings. If you are converting the same airport multiple times, this prevents you from entering all the information every time. Just save it once and reload it the next time you convert the object.

I hope this wizard is useful to you and improves the workflow of generating ground polygons. This is the first release of this feature, so please let me know if you have any suggestions or comments. There are some additional features that I have planned already, mainly the option to add night and seasonal textures with the wizard as well.