While working on the next update of the NL2000 scenery, I have learned some interesting things again. For this update I have worked on the road bridges we have in the scenery. These objects have been in the scenery a couple of versions already, but with the road traffic that FSX has added it became quite clear that the cars were not driving over the bridge, but through it. The solution for this was to add a platform to the road surface of the bridge. Adding the platform was easy, that could be done with ModelConverterX in a few seconds. But to my surprise that did not always give the desired result. 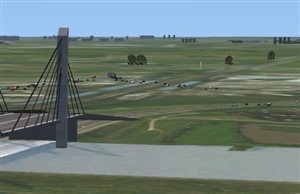 For many of the bridges the cars were now flying through the air. How comes? It turned out this was because the bridge had been placed with a scale smaller than 1. The road traffic is using the platforms as they are when the bridge is placed with scale 1. So in this case the platform was too big, hence the cars in the air. These bridges have been placed with the small scale, because they were designed in the time that integer vertices in SCASM made it necessary to use small scales to be able to have detailed objects.

So once I understood that, the solution was quite easy. All I had to do was scale the bridge in ModelConverterX as well, so that it could be placed in the scenery with a scale of one. That means that in the next update of the scenery we will have some nice road traffic using our bridges.

A few days later a related problem occurred. In a certain area all of the autogen trees were suppressed, but there was no big object nearby that could cause this. After some searching we found out that it was once again a bridge with a small scale. Guess what? The autogen was suppressed in the area covered by the bounding box of the object at scale 1, even though we placed it in the scenery with a smaller scale. So once again the solution was to scale the object in ModelConverterX and update the placement to use scale 1.

So what was the lesson of this all? You’d better use scale 1 for all your objects. Not doing so can give some quirky results in FSX.

One thought on “It’s the scale, stupid”