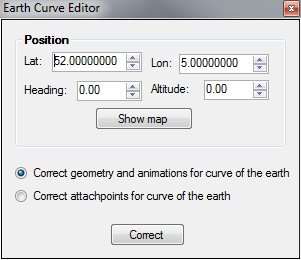 But this problem not only affects ground polygons, also normal buildings or animated vehicles can have this problem. Therefore an experimental function to correct for this problem was in ModelConverterX for a while already. Over the last week this function has been expanded and improved and therefore it now has become a new editor: the Earth Curve Editor. You can load this editor by clicking on the icon with the picture of the round earth.

From this editor you can set the position of your object and choose what you want to correct. Entering the exactly altitude of the ground is very important to get the correct correction.

A problem in FSX noticed before is that attached effects are offset from the geometry, the further you get from the reference point. This is related to the curve of the earth as well. So there are two chooses for a correction:

This new editor is in the latest development release. I hope it proves to be useful and let me know if there is any feedback.