I still remember how this started. I had made a video tutorial about adding effects to an object using ModelConverterX. One of the remarks on that tutorial was like “he would it not be nice if we can see the actual effect in the preview as well?”. Well, why not I thought, it should be fun to try to render the effects as well. So from that moment on the idea was spinning around somewhere in the back of my head.

I actually started coding it when I got back from vacation and after not that long I can render my first particle effect for a smoke stack. If you follow me on Facebook as well, you have probably seen the short videos of it I posted there. At the moment I think I can render the majority of the default special effects that come with FSX, although I am sure there will still be a few bugs in the rendering of them. Below is a screenshot of one. 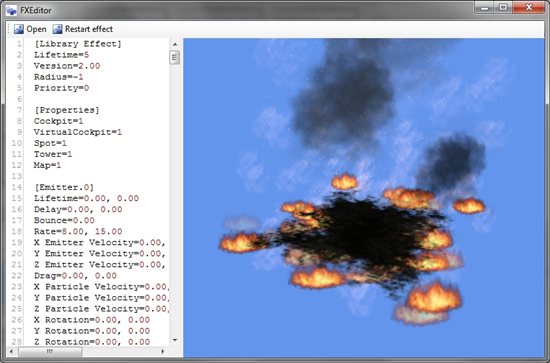 The main thing I still need to do is add support of the controller effects, these are effects that call other effects again. For example the firework shows are setup using them. At the moment they can not yet be rendered. Once that is done I think I am close to releasing this feature for everybody to play with. I am sure you will find some bugs in certain effects, but I will be able to debug that much quicker once more people start testing and using this feature. 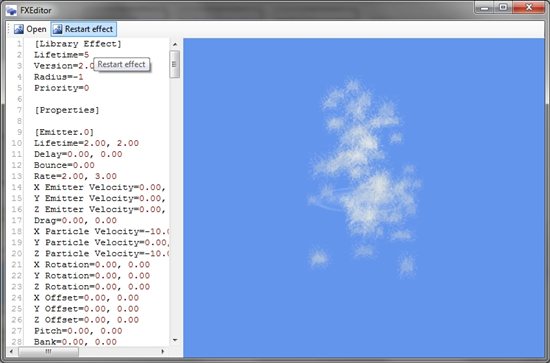 With this blog post I would also like to announce a new tool, FXEditor. You might already have seen in the screenshots that they are not from ModelConverterX. I made a small tool to help me develop and test the rendering of particle effects. At the moment the tool mainly loads the FX file and then renders it. But as you can see I have a text editing area in it already. In the future I want to make it an editor so that you can have a quick preview of edits you make to effect files.

It might take a little debug to make sure that the preview represents correctly how your effect will look in FSX later on, but I think that will be a fun way to develop FX files later on. At least I have a lot of fun with it now developing. I never realised that different kind of effects that come with FSX by default. In the last couple of days I have learned a lot already about how they work. 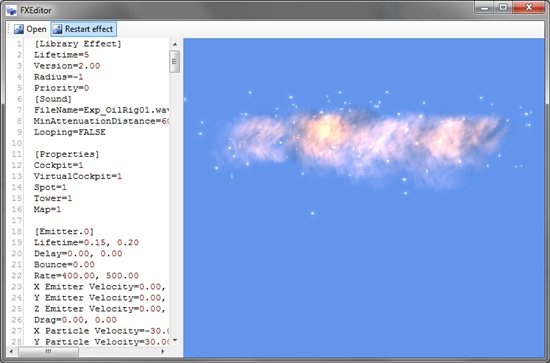 And as the icing on the cake I have also added a feature to hear the sound file associated with the effect. Especially the chickens of the barnstorm effect surprised the rest of the family here at home. Maybe I should add an option to not play the sound as well in the future.

OK, enough talking and screenshots for now (it is quite fun to view all the different effects). Tomorrow I will continue on the controllers and hopefully within a few days I can give this feature to the users for further testing. 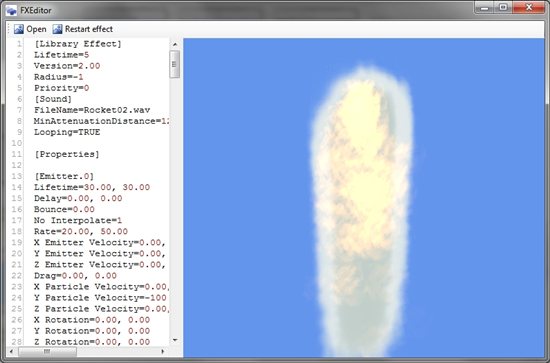