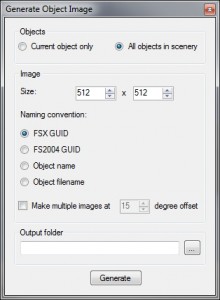 In the next development release two new graphical user interfaces will be added. Both for the object report function and for the object image function there is a GUI now.

The object image function was just a simple capture of the preview window before. This function now also has a GUI where you can set the size of the image and the naming convention of the file. The size of the image is not linked to the preview anymore, it can even be bigger than your screen size. So if you want you can make a nice high resolution rendering of your object.

A last new feature in the object image editor is that you can also set an option to create multiple images. In that case you specify a rotation offset and for each image the object will be rotated by the angle. So for example you make screenshots of your object with a 30 degrees offset between them. This can be useful if you want to show your object from multiple angles.

I plan to make a video tutorial about these new features soon.