After all the theory I blogged about yesterday, I thought it might be a good idea to illustrate the difference today. So let’s take a quite common example. I have taken the threshold coordinates of runway 06-24 from Amsterdam Airport Schiphol. And I have chosen the reference point to be near the middle of the runway. What are my XY coordinates of the threshold when I am modelling the runway in my 3D editor? 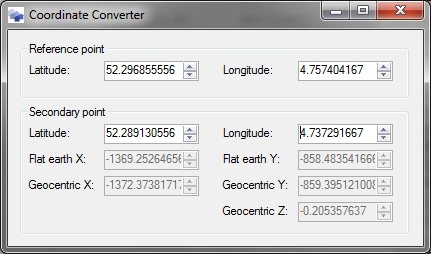 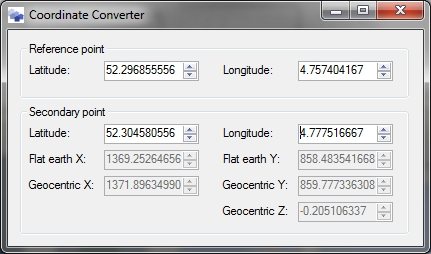 The two screenshots above show the XY coordinates for the threshold of 06 (top picture) and 24 (bottom picture). In the screenshots you can see both the flat earth coordinates (as used by FS2004) and geocentric coordinates (as used by FSX). Let’s ignore the Z component of the geocentric coordinates for now, although that shows that at the distance of this runway (1.5 kilometre for the reference point on each side) the elevation difference due to the curve is about 20 centimetres already.

But what do the other coordinates tell us? You can see there is around 1 to 2 meter difference in the values in both X and Y direction. And the geocentric coordinates have a bigger values than the flat earth ones. So that means that if something is modelled in the FS2004 coordinates, that it will appear slightly smaller in the FSX world. That’s why ground polygons with different reference points that fit exactly in FS2004, will  have some gaps between them in FSX.

The little converter that I show the screenshots from will be part of the next development release of ModelConverterX by the way, you can find it in the Special Tools menu.