I have made a few small changes to the Ground Polygon Wizard. These changes deal with the way you can filter out polygons from your object after loading. In the previous version there were two buttons for this. “Filter out non-ground polygons” would remove all polygons that were not on the ground, while “Lower polygons to ground level” would lower all horizontal polygons to the ground level.

The first is now called “Project flat polygons on ground”. This does almost the same as the lower ground polygon function before. The only difference is that you can now specify a tolerance for a normal that is still considered as flat. So that means that if you polygons are slightly tilted it will still work. Most of the time the default values should work fine. The second option still works the same and will remove all polygons that are not on the ground. Another difference is that the functions are performed in a fix order now. If you have the checkboxes selected first the polygons will be projected and then the non-ground ones will be filtered out.

I hope these changes make it a little easier to work with ground polygons in the wizard. And be careful with the default settings when you are loading a file that also contains buildings, the project option would project them onto the ground as well. In that case you would like to disable the option. 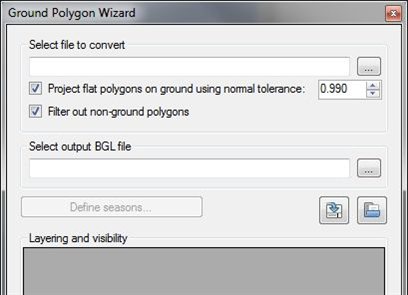